Remember when I was so excited about my scraps from Trudi in England? Well I have been playing with them and they are nearly complete.
I decided to practice the intuition process and kill two birds with one pile of scraps! 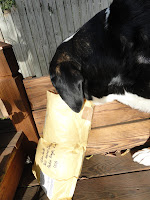 My scraps came in and I sorted out the red and the blue ones and combined them with my own. There were a lot of wonderful greens, but somehow I got hooked on the patriotic colors. Then the title became England Births a New Nation! 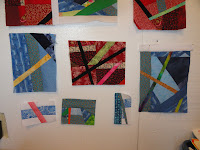 I set out to make some blocks. I really liked what one of our 15 Minute Quilting Bee partners was doing so I practiced on some of my blocks. Hers was a gorgeous red and black so I think that is where the red came from in my head. 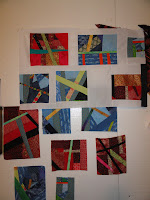 I really love the quilts all these modern gals are doing with the white spaces. So I decided to put white spaces in between my red and blue blocks.
I had to take the blocks down at this point and finish my mystery quilt for last week, and when I put it back up the blocks were all different. So I found that I could rearrange them and like them even better! So I did just that! 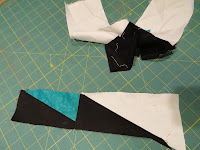 See that little piece of black on the top right? I liked it and decided to put another one in there. So I made this piece and put it in the quilt, thinking I would get fancy…..but didn’t like it, so I tossed it into the Unused Block Bin for another day.

So here is the top complete. Do you see the firecracker? I didn’t until just now, and it is way way too late! Ugh. But I guess if we have patriotic colors we need a bit of fireworks to set off the fun. (hmm. I wonder why I did not see that before now??) 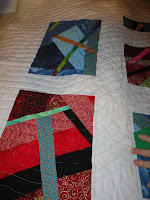 I did think about the quilting. I wanted waves like the ocean, the big pond, the water the Englishmen had to cross to get to Jamestown to drop off their settlers and start the Colonies going. So I thought about the discussion on here recently about just drawing a wavery line across the quilt and going for it. I found my blue disappearing marker and drew my ocean waves. Trouble was……I lost my line in some blue block, duh, and had to create the rest of the path on my own. It turned out OK though. I managed to do fine.
I started out quilting the middle with red, white and blue thread. Then I got it into my head to change to white, so I did that. Not sure if you can see it or not on the whole picture here, but it does have the two colors. 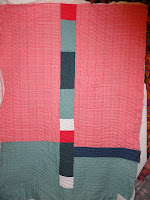 OH! And the BACK is really cool. It looks like a quilt in itself!

This was fun. Freeing. And exciting. I sorta kinda knew what it was going to look like, but it changed a bit as I went along.

Now I think I can ease into a REAL intuition quilt.

Thanks Trudi. Your scraps and mine are living together as mother country and child colonies!

This looks so great! Quilted and all--I am impressed!

Wow! This is fantastic, very partiotic in red white and blue! And I love all the inspiration that has gone into it, and the back! Fab! Funny you should put the greens to one side, those are what I've been playing with in my green and pleasant land! hehe!

It looks great! I love how you explained you process and the choices you made. I'm looking forward to seeing your intuition quilt too!

I love the individual blocks and the way they came together in this quilt. The colors are wonderful.

Thank you all! I am loving it! I quilted the lines two inches apart, then decided they were too far apart and ran a line between each at 1 inch. I wanted to do closer but I think it is over now.