I'm participating in the 15 Minutes Play Monthly Bee, and it's finally my turn to say what I want to get from everyone!

Believe it or not, I'm actually ready and have made a decision . . .

I'm going with blocks that read as one color, made of strips and strings. Here are the ones I've made for myself so far. 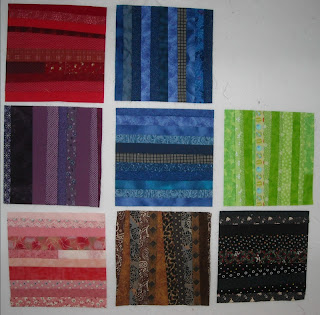 Here's a closer look at them, individually. 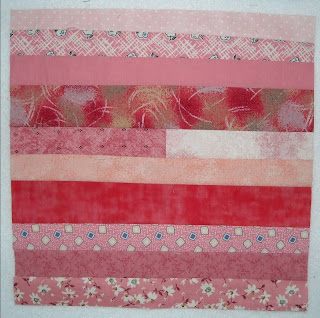 As you can see, the strips can be pieced from shorter strips, they do not have to be even widths or the same widths or any particular widths, or even straight. Just grab from your scraps and sew!

OK, so that's not really ALL I'm asking. I'm also asking that the strips "read" as all going one direction, and that the blocks be at least 12" square. That doesn't complicate things too much more, does it? You can send me one or two of these, whatever you feel like whipping up. 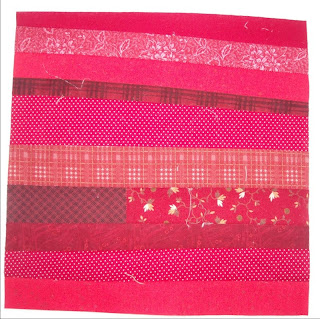 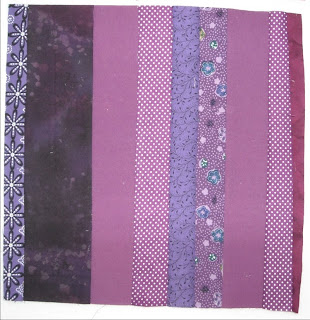 I'm a bit annoyed that some of mine came out so "linear", but that was the nature of my scraps and strings. 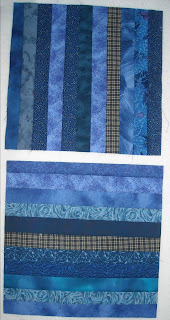 I think I like my brown one the best because it's the most crooked! 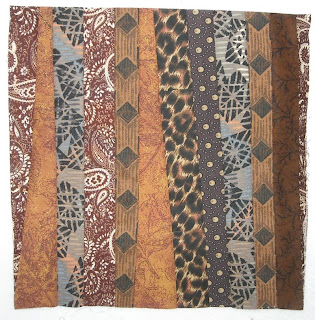 I have plans to make more for myself, starting with a yellow one, and an orange one, and another pink one, and . . . I'm a bit addicted to them already. 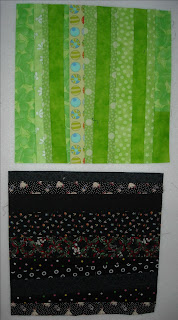 I'm also cooking up a plan as to what I'm going to do with these, and while I'm waiting for my blocks to roll in, I'll be experimenting to see if what I'm dreaming up will actually work . . . which remains to be seen . . .

JUST TO CLARIFY: I'm NOT putting these together plain! I'm just collecting colored blocks of fabric made from strips (and your strips can be made from pieces, and I like them crooked) so that I can cut them up and do something else with them. But since I haven't decided exactly how I'm cutting them up just yet (don't know if I want them all the same or different, PLUS I need more colors so that I can mix and match) I'm not doing the cutting until I've collected all my blocks. I know . . . boring for you . . . just sewing strips together, but it's what I need to complete my idea! I'll post more later as I get started with the cutting and mixing . . .

Everyone have fun with this. (Give me lots of colors!) I can't wait to see what you do! Eeeee!!

Oh yes....this quilt will be Bee-utiful!

I can't wait to see what Will become of these blocks, I know you have plans to CUT up whatever we send you!

Yes, there will be lots of cutting! So everyone send me lots of colors!

Oooo, how very intriguing! It will be fun to see what you do with the blocks of fabric you receive!

YUMMY! This will be delightful, no doubt. I cannot wait to see what becomes of all these blocks. Is it ok to throw in a slight bit of curve here and there? Or would you prefer "crooked" straights?

How did I miss this post?? I am recovering from dental torture to replace a 50 year old filling, so it will be Thursday before I get bac into the sewing room.

Curvy lines are fine. Dang, you all are FAST!