Here is where I left off yesterday. 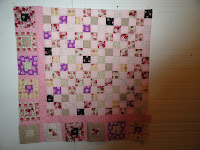 Pink, imagine me working in pink! But I am! Here are some of the leftover 2 1/2 in squares surrounded by 2 inch strips. No rhyme or reason to this either. Just added them in on a background of those dots. 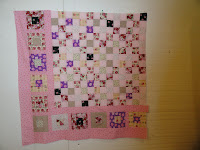 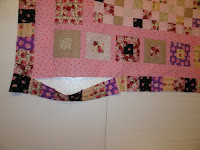 I saw a quilt I liked that I am trying to remember. It had a line of squares outside the next row that was the end of the quilt like a border. Maybe they were piano keys. While this won’t be the edges of mine, here is a row of 3 inch squares that will serve at the next row out.

As you can see, nothing is going to line up properly and I must sew a bit of ease into a bunch of blocks. I guess I will be sewing ease OUT of the blocks, right?
Ohhhhhhhh! I just had a really fabulous idea! Words. I have been wanting to try Tonya’s Word Play. It looks complicated and time consuming, so I have been putting it off. Well, here goes!

R O S E S seemed to be the natural thing. I thought maybe R O S E but that was someone’s name and I didn’t know any Rose People. I could wait until someone had a baby and named it Rose, but that seemed too iffy. So I settled on making one more S. Like I said, it seemed complicated and I didn't’ want to add any more trouble than I needed to.
Trouble? Did I say TROUBLE??? It was so easy. The letters went together so easily. It was a breeze. I had a harder time trying to find the letters in the book
Posted by Glen QuiltSwissy at 8:33 PM

Love watching your Roses grow, Glen. Your letters are outstanding....I must try some now.

Get well wishes for Dutch "HEAL"

I am learning a LOT from the detailed thought process and the questions you ask yourself as you think through this quilt. And I discovered Tonya's book and LOVE doing letters too! Thanks much!

Looking very rosey! Just love it. Nothing wrong with a square quilt.

Don't worry about easing those 3" squares into the right length! Gwennie always says"If it's too long, cut it off. If it's too short, sew something more on." So just MAKE a little more or less of the 3" squares. They don't need to come out "even".

Hi Glen, Your quilt looks great. What book did you get the lettering from? I took a Mary Lou Weidman class this weekend and I would rather piece the lettering instead of applique them. thanks

I like where this quilt is going. The letters are great. I agree that square quilts are okay, but it took me a long time to come to that conclusion.