I have been really enjoying watching the rest of you as you create your beautiful 12 x 12 mini's.  Each one posted so far has been just terrific!  So, I decided to brave the sewing room this afternoon and start playing.  I had an idea in mind and knew kind of where I wanted to go with my mini, but I have to say that so far it is turning out nothing like I planned!   I guess that's the idea behind the 15 minutes of "playing" though.   It's not supposed to be exactly what we planned, right? 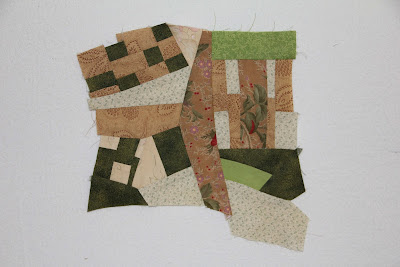 This is mine so far - it's only about 9" x 8" and I have NO idea where it's going.  From watching the rest of you, apparently I'll know when I get there!
Posted by Sandy Panagos at 3:05 PM

Keep having fun on the journey!

This is looking terrific. I love the earthy colors. Just keep following your instincts, and trust that you are going in the right direction.

Well, after I posted this, I stopped thinking so much and just sewed and cut and sewed. It's really shaping up now and so far I am really happy with how it's going. Now I just have to figure out how big it should be before I start quilting it. Anyone know how much it will shrink up with the quilting???