Even My Ancestors Practiced 15 Minute Quilting!

I come by quilting and sewing honestly.  And even my style of throwing stuff together and not painstakingly piecing each perfect stitch, is an honest trait as well.  V said I could share with you the history of one of the Antique Crazy Quilts I have from my Grandmother and Mimi from the early 1900's.  I thought, hey, they did 15 Minute Quilting from the looks of it, too!  LOL.
﻿
﻿

My mother's mother Irma Pottharst Sellers and her aunt Willemena Pottharst Rowley both immigrated to America, my grandmother as a young girl and her Aunt as a young adult. They came from the Alsace-Lorraine region of what we now see as France. It went back and forth between France and Germany for centuries.
When my Grandmother and Great Great Aunt Mimi were born it was under German rule and I have a birth certificate and her marriage license in German for Mimi, as my mom and I called her. Mimi came here with a bit of money for those days and my grandmother came with her parents. But her parents both died in some great illness (probably either the Yellow Fever or the Smallpox, my grandfather had smallpox scars on his face) that swept New Orleans, and my grandmother was apprenticed to her aunt as a teen. Mimi was a talented dressmaker. She was highly requested by the elite of New Orleans to construct their gowns and fancy clothes. She also made day suits for the gentlemen. (I have a second quilt of the scraps of men's wear.) They made the clothes without using patterns and had a collection of dresses made of muslin that were the shape and size of each customer.
As all high society in New Orleans was, many of her clients were members of the elite Krewes of Mardi Gras. Rex was the most high of all groups and only the wealthiest and politically connected inherited those spots. The Mistick Krewe of Comus and the Knights of Momus were two of the second highest level Krewes. Still today mere mortals cannot be members, you must inherit these memberships. In the early days there were true royalty from Europe in the membership.

Some of their gowns hang in the Cabildo (or is it the Presbytere, I forget) in Jackson Square. These are the museums that flank the St. Louis Cathedral. They were heavily hand beaded and ornate.

﻿ ﻿
﻿﻿ Don't think they were paid well for their incredible work. Mimi always had money but was never rich. And they would often receive "gifts" of items from their clients if the clients were happy. I have a few of these treasures but most were lost in the fire in my parent's house in Metairie, a suburb of New Orleans. One treasure is a vase which was a favor from the Rex Ball of 1917.

Here are some pictures of one of the quilts made by Mimi and her sister Big Bertha who would also help do the sewing. (Little Bertha was Big Bertha's daughter, Big Bertha was actually a tiny woman!) These quilts have been documented and registered with the Louisiana Historical Quilt Project.

This first picture is of the quilt on the table that I got from the house Mimi lived in in New Orleans off St. Charles Avenue, the ritzy part of town still today. I thought it would be a better shot than it actually is, but the table is huge, seats 8 comfortably and the quilt hangs over a lot on all sides. The second one is with my hand as perspective. Some of the silks and moires can be seen. The black by my hand is velvet and the black crepe past the blue moire is eaten away. The colors that remain are surprisingly vibrant.
﻿
﻿

Three is showing some brocade in a teal blue. The pink next to it is just half of the weave left so it is strings.
Four shows the way the fabrics were sewn on. Not very professional looking for seamstresses! But I guess I come by my messy work honestly!

Five here is more of the frayed fabric. And the blue is a satin or sateen. Six is more colors and pieces. The mauve at the top is velvet. The cream color is where a black piece has totally disintegrated.
﻿
﻿ 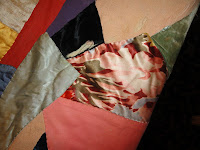 I love the printed piece of satin fabric here in seven. The pieces are just placed and sewn on willy nilly. How odd. 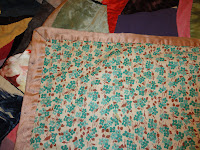 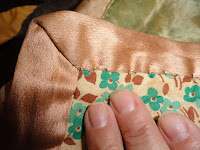 Here is where it gets interesting. The back and the binding. The binding appears to be a satin they used to use a blanket bindings. It is still shiny and soft. It is attached with hand stitches and mitered at the corners. The backing is a plain printed cotton. No stitches show through on the back. The fabric pieces are sewn on a foundation of muslin under this backing. The other quilt, the men's wear, has no cotton backing so you can see the muslin foundation. Not sure why that was done that way and this one this way.
Again, the stitches are not high quality work. Not at all what I would expect from a pair of seamstresses.

I treasure these quilts and admittedly know very little of what a true quilt historian would know. One day I need to take them to LSU and get one of the textile professors to tell me stories about them.

I will show you the other quilt, the men's wear, one day. And I have two quilts from Frank's family that were made in the 1950s or 1940s, probably by his grandmother. They are more traditional, what I would call pioneer quilts. But a good lesson in all this is a lot of what we are seeing in Modern Quilting is really Old Quilting just new again!

glen: I hope you enjoyed my family's treasures.

Posted by Glen QuiltSwissy at 2:51 PM

Thanks for sharing your family quilts! I have several my grandmother made and treasure them. I know she was prolific and wish I had photos of other quilts she made.

Wonderful! Thanks for sharing.

Wow, how lovely to know the background and the wonderful stories of the past. And how precious those quilts must be. Thanks so much for sharing the tale..looking forward to seeing the pics of the mens fabric one.

thank you for sharing, it's so inspiring. I hope my quilts will be treasured like this in 50 years time.

Thanks so much for sharing your family history an the beautiful crazy quilt. How are you storing this precious quilt? I have one that has some of the same issues as the one you have displayed. I am worried that I may not be doing it any favors by not really knowing the best way to store it and keep it preserved.

Thanks for taking the time to share this with us! I really enjoyed it.

It's fascinating to see old fabrics. Thanks for a very interesting post.