THE PIG AMONG THE FLOWERS

I usually begin with some sort of idea. For Pink I planned to make a small mini with four flowers, each flower to have a small frame, then the four surrounded by made peachy fabric, all of which would then have a frame of pink fabrics. 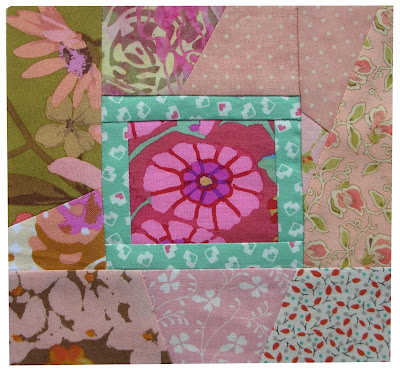 Meanwhile a homeware shop nearby had started stocking modern patchwork fabrics so I went along to have a look - and found this. 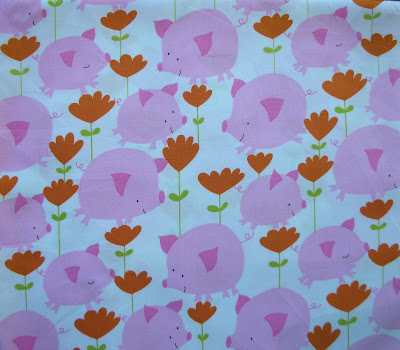 Now if you were doing a pink project could you resist this? Me neither. So the idea changed to make a mini called "Three Flowers and a Pig". I made the pig with its frame, which had to be different from the flower frames, and carried on. 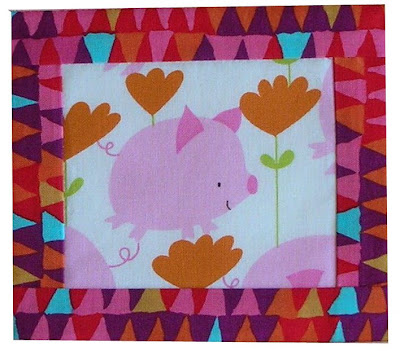 So now it's a small mat called "The Pig among the Flowers" and the flower is on the back. 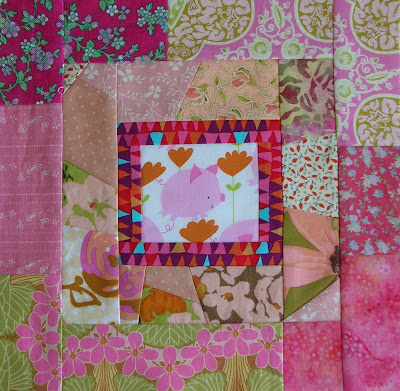 What did I think of this colour at the start?
I didn’t always like pink but now, in the last few years, I love it. For me, it is a happy colour.
What fabrics go with this colour?
Peaches and oranges, reds and browns.
What fabrics don’t go with this colour?
Powder blue and yellow.
Do I like this colour better or less after working with it?
Yes, I like it even more, I want to use more pink – dark pinks, cerise pinks, pale pink, any pink.
Will it inspire a new palette?
I think it is due for something different from peach. Navy blue? Black even? (Although I don’t think the Pig would have liked black).
Other comments
If I hadn’t been doing 15 minutes PINK would I have bought the pig fabric? No, I wouldn’t even have considered it. Do I like the pig mat? – yes, it will become a favourite.
Posted by sheila 77 at 8:18 AM

That is so funny - and an adorable pig among the flowers!

Miss Piggy is adorable! I love all your pinks, too.

What an adorable commentary on your "plan"!! Love the flower AND the pig. The flower fabrics are lovely, and the pig looks quite happy ~ even though he didn't share nicely. Great work!

This is so very cute! I love the creature theme you have going on. What a wonderful collection to put on a wall. I love the fabrics you put together and created the framing for the pig. You have a wonderful eye for color and pattern. Great job.

You are so clever.. Love the pigs!! I might have even picked that up to use too! Hehe!

Yes, Miss Piggy has a way of taking over everyone's life she encounters! jk But your little piggy mat is adorable! I love how you started out in one direction and ended up switching to another. Happens to me all the time!

I want to see Ms. Piggie next to Nessie. I think the pinks and blue/greens will look beautiful together. I do think I might have bought the pigs too. Great.

This is a charming block!