Tea Towel is Coming Along 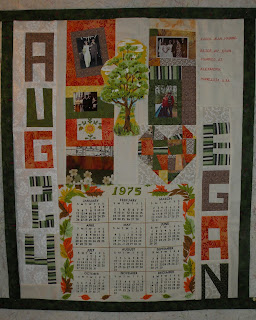 What I have done so far is a rearranged version of my earlier ideas. I decided I really didn't like the picture printed on my tea towel, so I cut it up and just saved the calendar part and the tree. The tree represents Family Tree, in my mind. i used my machine to write our names and the city, state where we were married (on the right, top). I've been monkeying around with a bunch of ideas for the borders, but everything was too distracting. So far I have this narrow border which hopefully will help set off the center of the quilt, so I can add some wilder second border, and it won't distract so much. At this point I have no idea what that second border might be.
Posted by Carol E. at 9:23 PM

This is a brilliant idea with a calender tea towel! Very inspiring! Can't wait to see what you do next!!

looking great! the day you were married my stepdaughter was born. how funny is that!

I really like this. What a cool way to commemorate your history.

You are really making that Tea Towel work and making it your own. I love the use of the stripe in your letters and how you used the tree. I'm confident you'll figure out the borders and it's going to be great.

This looks wonderful. I love well, everything, but especially the heart. Just a suggestion. What about a border of made fabric similar to the heart?