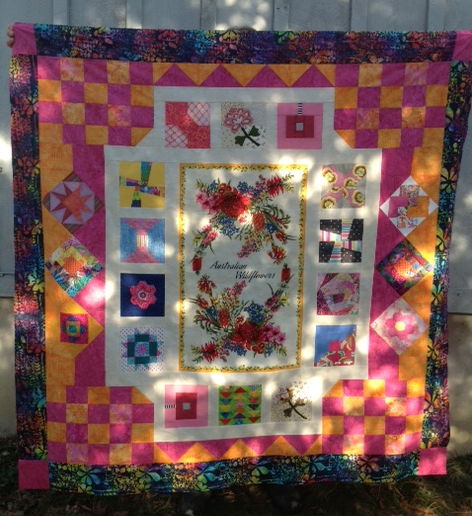 You Just Never Know (warning: this is a long post!)

When Victoria first posted the Tea Towel Challenge in January, I was immediately intrigued. Even though
I've acquired quite a few tea towels and calendar towels over the years, I went online to look for some
different ones and ordered a few. 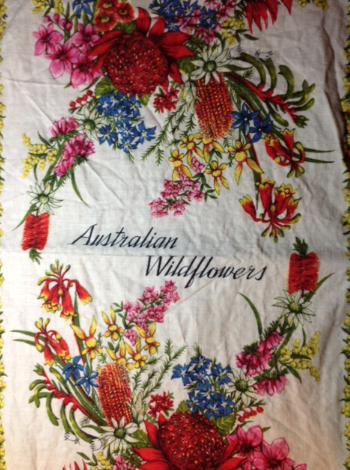 Two of the towels I ordered had Australian motifs. I've never been to Australia, but I'm a huge fan of
Kathy Doughty (materialobsession.typepad.com), so I decided to buy them. I even had a thought that
I'd turn one into a quilt for Kathy, but then thought "why would she want a quilt from me?". The rest of
this post is a "you just never know" story.

Back in the fall, I learned that Kathy would be teaching two classes at Quilting by the Lake, in July 2013,
in Syracuse, NY, an easy drive from my home. I immediately signed up for her "Fractured" class. A month
or two later, Victoria announced that she'd just signed up. JOY! I'd be taking a class from one of my
quilting heroes, with another quilting hero as a classmate!

Here is where these two story lines begin to merge. On February 19th, Kathy announced on her blog
that she'd just been diagnosed with breast cancer and was having surgery the next day. I immediately
thought it would be nice for her future "Fractured" students to do something for her, so I contacted
my future classmates. They all enthusiastically agreed to participate in a group project, so I asked each
of them to send to me one or two 6.5 inch blocks in a style that best represents their style (Kathy had
requested that each of us bring a sample of our work to QBL so she could see our styles) and use pink in
every block. Then Victoria offered to hand-deliver the quilt to Kathy when she goes to Sydney to teach
in Kathy's shop! The problem? There wasn't much time to pull this off! It was February 20 th, and Victoria
was leaving for Australia on March 15th! So, I then gave the group a March 1 st deadline for getting their
blocks to me! 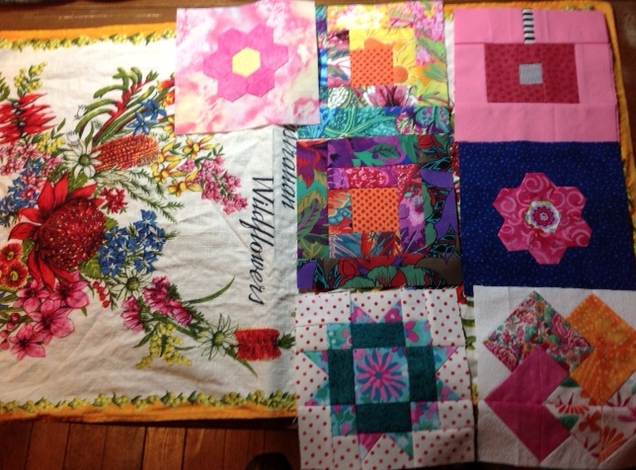 Two days later, the first blocks arrived! The last blocks arrived by priority mail on March 2 nd. I then
went to play. I'd been wondering how I would turn the 20 blocks into a cohesive whole that wasn't a
simple 4 x 5 grid pattern when, while getting ready for work one morning, I remembered that I had the
linen Australian motif tea towels and that one would be perfect for tying the various styles and range of
colors together.

And, just like that, I was suddenly making a quilt that would qualify for the tea towel challenge and
making a quilt for Kathy Doughty. Didn't I say this was a "you just never know" story?!

This project was a challenge for all the participants for various reasons. Some of the participants aren't
partial to pink but ended up enjoying the "mind-opening" challenge of using it. Others were challenged
by making time to get their blocks made and sent to me by March 1st. I believe I had the biggest
challenge because (big admission here!) I spend more time reading quilting blogs, buying fabric, and
designing in my head than I do actually making quilts! So, I hadn't actually done many of the techniques that were needed to make this quilt. 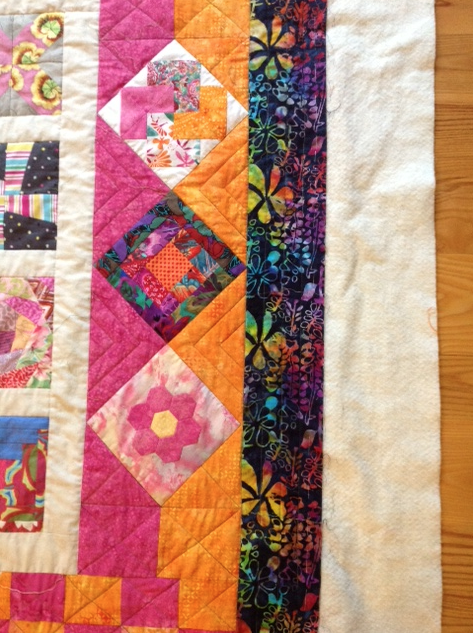 I didn't follow all the Basic Rules because of the nature of the project, and, more importantly,
because I didn't actually read them thoroughly until I started to write this summary. The colors in
the blocks "chose" the towel, not vice versa; but it did become the center medallion and I built the
quilt around it. I incorporated made fabric MADE BY VICTORIA into the quilt. I used many new-to-me techniques, including using blocks made by other people, totally making up the design as I went along(great fun!), and – this is where the play seriously turned to work – machine-quilting something rather large (five feet on a side) with a design that, while relatively simple, was far more complicated than a bunch of parallel lines, which is the only machine-quilting I'd done before. I did not work at my own pace because of the deadline based on Victoria's departure for Australia. And I didn't report progress because I didn't know this was going to become a challenge quilt and a blog post, and I didn't want the quilt to "go public" before Victoria gave it to Kathy. 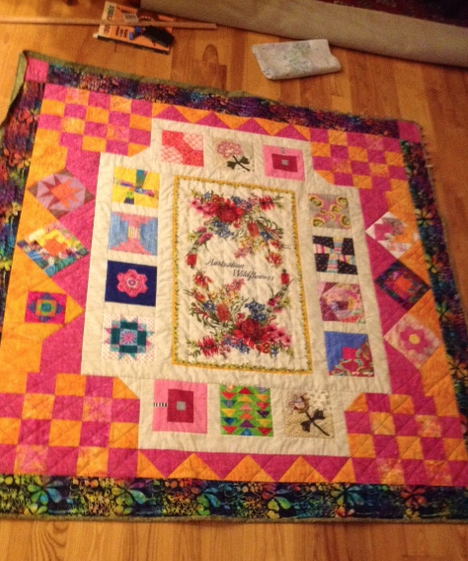 So, that's the story, which I would have had no reason to write if my new "Fractured" friends hadn't
agreed to participate.

I'd like to publicly give my heartfelt thanks to my co-creators of this quilt: Liz, Ruth, Helen, Earamichia, Marge, Lisa, Karen, Robin, and Victoria. Thank you all, so very much! I'm so looking forward to meeting all of you in July!

I also want to acknowledge and thank my local teacher, Sharon, who has inspired in me a love of hand-
piecing, needle-turn applique, hand-quilting without a hoop, and batiks. Sharon also happened to be
working in a not-too-local QS when I stopped in with only thirty minutes to find fabrics for the sashing,
setting triangles, and backing. We flew through the shop, pulling bolts of fabric from the shelves until I
was able to say "yes, yes, yes, yes" and had everything I needed to complete the project! ~ Laurie
*****

Thanks LAURIE!!!! We all had so much fun contributing to this quilt,and I will indeed bring back pictures of the handover!
You did everything! There areno rules, other then PLAY follow your instinct, and put as much love into the quilt as possible, and that YOU did!  HUGS!  Victoria


Posted by Victoria Findlay Wolfe at 12:01 AM

Great work which I am sure the receipient will treasure! There is nothing as inspiring as working towards a real life deadline, is there!

What a wonderful story of hard work and friendship and what an absolutely beautiful quilt. Brilliant work, Laurie.

Oh Laurie you have brought a tear to my eye. A wonderful quilt so full of love.

I am so glad that you did that!
I was also moved by KD's story and sent good wishes with Victoria.
The quilt is lovely!!! It takes the cake. My top is done and my batting just arrived so I can work on finishing it.
Congratulations - can't wait to see the recipient...tears of joy!

Love the quilt, but love the story and the love behind it even more. Awesome job.

What a story! Congrats and hugs to all you loving ladies who helped bring Laurie's idea to fruition.

Love, love, love the story and the quilt! What a fantastic job and beautiful execution!

Laurie, the quilt is sooo beautiful it made me cry. Your heart, everyone's heart--was soooooo into this. I can see the love. What a wonderful gift.

I love everything about this quilt, and the story behind it. Congrats to you - you followed your instincts and created a beatiful labor of love. I know that Kathy will feel the love of all of you when she feels it around her. I love how blogging has really made it a "small world" indeed. Thanks for sharing.

Gorgeous and beautiful in every way. What a lovely gift!!

What a wonderful story! The quilt is sooo gorgeous!!

It's a great quilt (with a great story). Kudos to you for making it happen!

Kathy will treasure this quilt, it's got so much love stitched into it. I believe quilts have a way of coming to life when they are needed!

What a wonderful quilt and a wonderful story. there is nothing better than a quilt stitched with love and it sure shows - what a brilliant and heartfelt challenge that you all rose to . Fabulous!!

Laurie,
As one of the participants, I can't thank you enough...especially when I saw how different all of our blocks were! When I read Kathy's post on her blog yesterday, I knew that you would be thrilled.
Marge