Well, that took awhile but it is done (except I have to snip threads) and was claimed by my son for his bed!  Ultimately, I think it will be a picnic quilt for concerts on the green and the like. 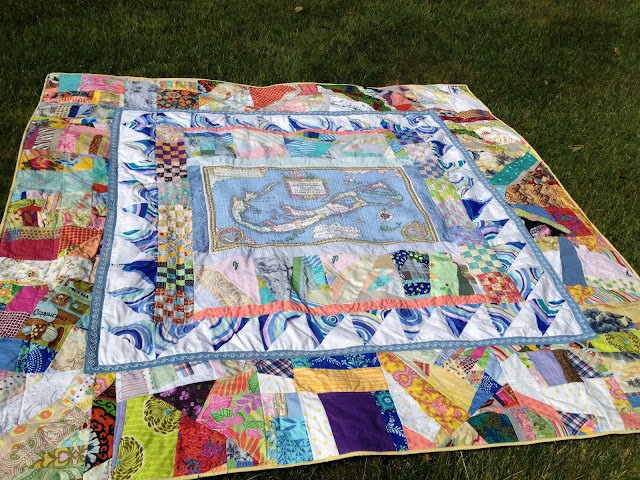 It's not quilted heavily except on the tea towel which is nice and cuddly.  Close up below: 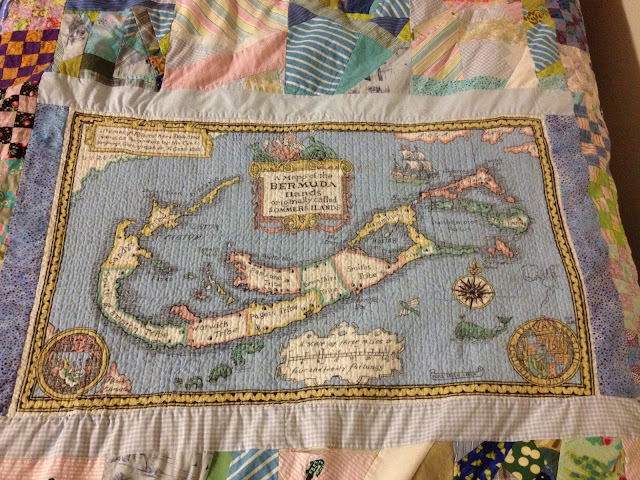 Quick review - I hadn't worked with so much "made fabric" before and there are some spots that came apart which I will have to hand sew back together (small price to pay!).
Initially, I though this might be a low volume quilt, but I found that terribly boring and started adding lots of color and orphan blocks.
As I played, it did all flow together and take shape on it's own.  Adding the ribbon was a new trick which I quite like and I pieced large scale concentric squares for the backing.
Wrapping up, making this quilt made me realize that I prefer to go with the flow rather than follow patterns, although I do both.  I tend to start with patterns and adapt or modify them as it suits me.
Thanks for a wonderful learning experience Victoria!!!  Now I can start my architectural challenge - although I will probably miss that deadline : )
Posted by Sewing In CT at 7:07 PM

This looks great! Deadlines & I are the same - we don't seem to get along. I have my tea towel, just didn't get further than that.

This looks great! Deadlines & I are the same - we don't seem to get along. I have my tea towel, just didn't get further than that.

Feathers in my Nest said...

Beautifully done! Gorgeous quilt, Love it. what a great idea. I have a huge collection of old tea towels, you're making me think now.

Little chance I'll make the architecture challenge deadline either... perhaps we can talk Victoria into extending to the end of July?

Your son will probably love making his bed now. How clever of you! I love all your Bermuda colors...especially those blues.

It's fabulous! I especially love how the pattern in the trim you added resembles the border around the tea towel.

You've inspired me to get cracking on finishing my tea towel.

Great finish! I really love how you changed your approach and the resulting fun you had with this challenge.

Greetings from a Bermuda quilter! We've always felt that the Rock Island should be at the centre of things. A lovely result...well done!

Congratulations on the completion of your Bermuda tea towel. The central tea towel looks very detailed compared to most quilting designs. I think that the best way for artists to work, and I definitely consider quilting to be an art form, is to be influenced by something and to create their own new work off of their influence.

from Jean Hall at Professional Doctorate

Wow, that is just great, what a treat !