I am so fabulous!

Well, maybe not all me is so fabulous but my blocks certainly are!

I have been taking a chunk of time, generally a bit more than 15 minutes but not significantly (like 4 hours or anything) and working with my scraps that flew over the great vast ocean from the UK. 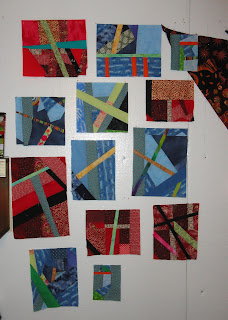 I did combine them with some of the scraps I found hiding in a corner that didn't actually make the journey (but should have).  But the result has been fun, mixing up mine with hers to become ours.  The in-between will be white.  I have the white so it will come from the stash as well.

I have been thinking of names for the piece:

Yours, Mine, Ours
Mind Melding
Stash Merge

But I think I like this one best so far since it will be essentially red/white/blue:

And maybe I will have it done by the Fourth of July!  What you see in the corner of the picture is the Patch No Work I was working on last July.  No joke!

glen:  subject to change, I had a great really cool  flowing name yesterday when I was thinking up this post, but it won't return to my head.........maybe later
Posted by Glen QuiltSwissy at 9:10 AM

They are fabulous! All these AND the snowballs? Have you kicked the computer game habit, Glen??!

Yes, you ARE fabulous! And so are your blocks.

Oh those are fabulous! Add a whole new meaning to 'United Nations' or even 'United Notions' LOL And while I'm on a roll, how about 'Over the selvEDGE'?

Terrific or should I continue with the Fabulous?!! Love that theme

What a great way to use up the scraps. Looks great!