Of those vintage prints I showed you in my last post the smallest piece was the white with the blue birdhouses so I figured that would be the best place to start. I cut it into three sections. I guess only two of the sections are visible in the photo below. 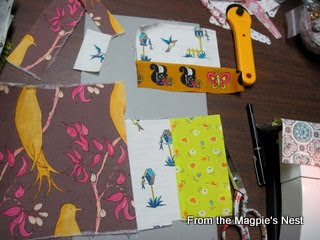 It's been quite a learning experience for me to remember to stop and take photos as I work. I think the trick is going to be knowing when to shoot and when not to bother!

For this post I've decided to just show you how one section developed. Obviously the cute little skunks were added first. 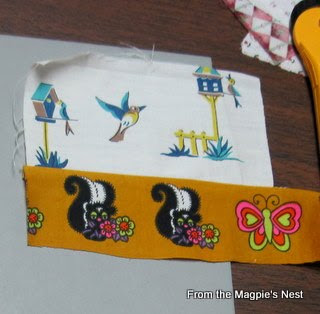 I auditioned a couple of strips of white and blue across the top of the section and then down the left side. You can see that I ended up using black instead! A blue calico went on the right side, just as it came out of the envelope of scraps from V. 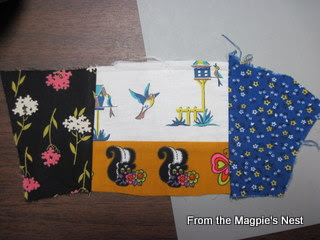 I still wanted to address the top however. I liked the pink: 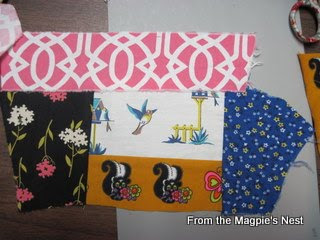 But I really hated to cut off the top of that birdhouse. I have to confess that the blue calico didn't behave well under the iron either. The solution? Cut it off!

No more birdhouse, no more blue calico. Had to fill in that side though. I happen to love the way this contemporary print fits in. :- ) 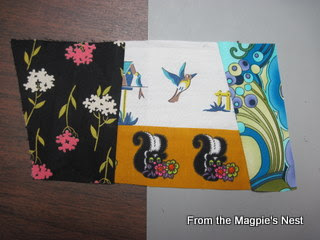 Finally it was time to add a strip across the top. But it turned out not to be the pink... that ended up elsewhere. 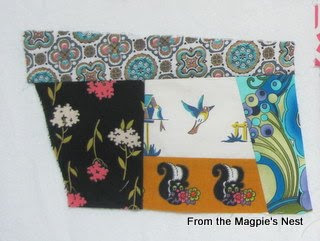 I've added another print on the left side since this photo was taken; you'll see that later. This is only about a third of the work I've done so far (maybe less). Because I had three sections to work on I always had one under the needle while I auditioned pieces for the other two, thus avoiding the issue of long threads at the beginning and end of each seam.
I'm seriously having second thoughts about sending this off to Janet to play with. Only because I'm loving it so much and want to keep working on it myself! Besides, it will be fun to start another intuitive quilt. ;- )

hahah! isn't that fun! hard to pass it along! Go for it! Everytime I see mine, I just get more excited... so fun!

That looks so fun!

Great mix of color and prints!