So today I had this wonderful idea for borders. I thought for a while that it did not need borders, but I really MUST put borders on this. I thought it needed to be just bigger.

Then, after I started getting borders on it, I thought, duh.....I could have put more blocks around it to make it this size and used up more blocks.....but borders were already begun by the time that realization hit me. 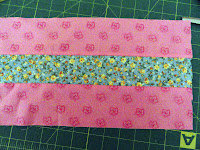 So borders it is. I wanted a "stop" border, and an outside border and that thought evolved into a three strip border. 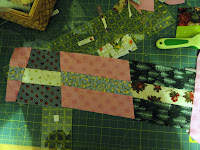 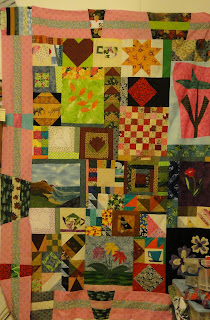 Do you think it looks too odd with the chopped up border and would look better with a "normal" border?
I am thinking that it doesn't look as bad on the design wall as it does in this picture.........

glen:  I can't find the dog gone cup that was on the floor either, I was going to put it into the border, but nooooooo!


Posted by Glen QuiltSwissy at 7:14 PM

This border works well! Sticks with the fun, wonky theme.

I really love the way this is looking. The broken border invites the viewer into the center of the quilt. It is so cool.

I think it's brilliant!

Wow! You gals surprize me with those comments. I really thought you would say to pull it back. I have one more side border to do.

Thanks for your comments.

I am thinking of quilting in arcs.

I love that chopped up border!

The border is fun...if you haven't sewn it on yet, why not chop even more and add more wonky strips (as V might say!!)? If it's sewn...leave it...life's too short for all that unpicking and it's fine as it is!

Absolutely love this border which draws your eye right in! Question: Do you really need it on the 4th side?

I love those borders! The whole thing looks spectacular!

The chopped up border is genius! Please don't make it "normal." It's wonderful. I don't think you need it on the 4th side at all. I really love this.

Well, yeah, maybe on the 4th side too. Haha. I can't stop looking at this fabulous quilt.

wow! Cool! I'd like to see more play, i love where it's lead you so far! what would it look like with a fourth side?

I like it! Go for even more on the 4th side!

alright! chopped up border it is!

going to work on it RIGHT NOW!

Hey, I found the cup! It's in the quilt.