You know, even when you're doing "liberated quilting," you need to follow some basic rules of quilting. I failed to do so, and thus needed to make a second 12 x 12. The first is just too shoddy. 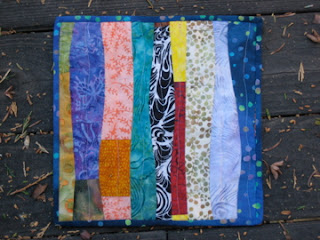 Here's the first. I've used up most of my non-batik fabric scraps on other projects, so I decided to make this swap mini using batiks. I also decided to borrow one of Victoria's techniques - the wavy strips. Here are the mistakes I made:  1) I trimmed it to 12.5" BEFORE I quilted it.  Why did I do that? I know not to do that, but did it anyway. 2) I didn't make the batting and backing large enough, so after I quilted it, I had to trim it down to about 11".  3) I was hasty with the quilting, which basically was wavy vertical lines, and the backing bunched up - another reason I had to cut it smaller.  4) I didn't put a border on it - and I think it would have looked better with a border.

While I was stitching on the binding, my husband walked in with today's mail.  He handed me the walking foot I'd ordered last week, and I decided to make a second 12 x 12.   Up until now I've done all my quilting with a regular foot.  After reading on two different forums that there indeed was a walking foot that fit a Featherweight, I decided to get one. It sure does make a difference! 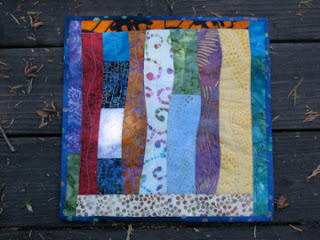 Love them both, Cyndi! Enjoy your walking foot! I know I couldn't
live without mine.

haha! lucky walking foot arrived! I think we get very hard on our work... they both look great... I've done that too... I usually try to cut big now just to make sure I have to CUT TWICE to make sure I don't mess up the first time... measure once cut twice, isnt' that what they say? I say, cut twice just to be safe!

Hahaha. Don't ask V. she'll always say "cut it again!" I think they both look wonderful, and I loe the black and white in the top piece. Pretty sure most here would love which ever you decided to send!

Your wavy lines add a lot of interest!

I like them both. The colors are great and the wavy lines work very well. Does the walking foot really make that much difference? I will have to try one and check it out.

The difference between the two quilts is not evident on the front side, but the back. The back of the first one is all bunched up. As to whether or not a walking foot makes a difference, I believe it does--now that I'm using one. It pulls the top layer through at the same speed as the bottom layer, so Fabric in the bottom layer doesn't get bunched up. It took me a couple of years to get a walking foot, but I'm glad I did.

Whoever receives your quilt will be delighted with it, I'm sure. It looks great! Worth the extra time and effort - and you learned something in the bargain ;- )