The Other Half of the Swap

A quick look back revealed that I had not posted my process with Janet's inuition block. Sorry about that! This is what Janet originally sent to me: 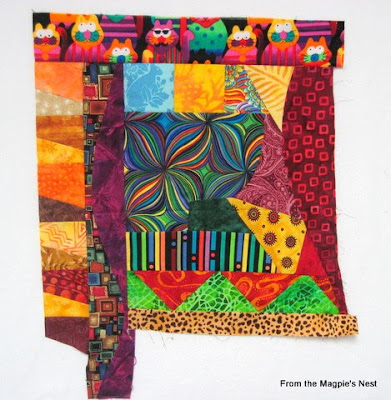 All that lovely color! The first thing I did to it was to add strips I had laying around. I felt it needed a little value change and threw in that really light strip. A little too light in hindsight. 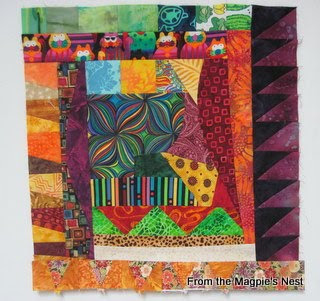 The bottom strip is actually pieced of triangles. Tiny freestyle flying geese in fact, although the value contrast is not sufficient for that to show up in this photo.

At this point I got stuck. I know I posted about some of the blocks I was making, sticks and things, thinking some of them might end up in this project. As it turned out, they didn't seem to really fit. Eventually I felt drastic action was called for. I slashed right through Janet's block. My first thought was to quarter it but after that first cut I was afraid any further cuts would make the resultant pieces too small to be pleasant to work with. I really liked that slash of pink through there though! 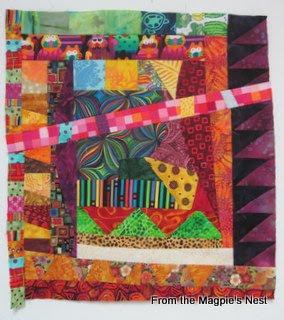 Janet has since revealed that she's not really a "pink person" but I felt more of it was called for. I made some more freestyle blocks and played some with them on the design wall... 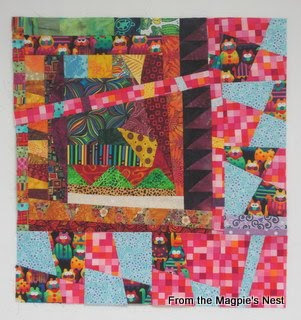 I felt fortunate to have some of the same cat print that was in her origianl block. I was able to make some additional blocks using it. These stick blocks could have been arranged to make an interesting line... 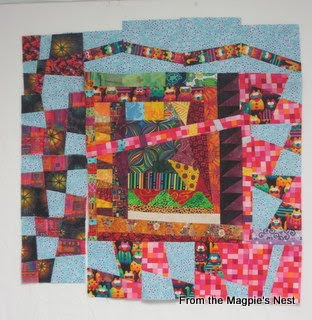 It seemed like I either ended up with too much blue or too much pink for a while there. 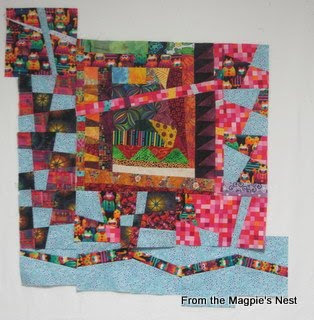 In the end the line of sticks didn't make it into the final quilt top. I think I sent Janet a fairly balanced composition though: 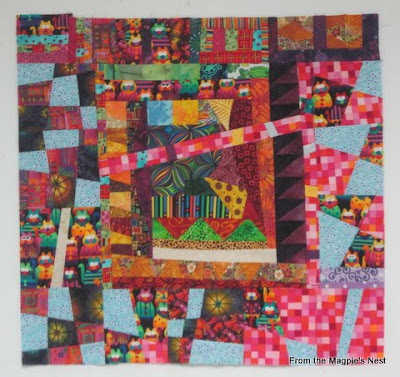 I also sent her some of what didn't end up in the quilt top. Maybe she'll figure out a way to tone down that pink. ;- )
Posted by Magpie Sue at 10:37 AM

I like the brightness of the light blue and pink. It will be a good spot to work with on the next round. The lights are giving it a lot of great movement!

This just kept growing until it was marvelous. The pink and blue add so much zip. Bonnie