I finally got my blocks made for Brenda. I found this assignment difficult, but I'm going to blame it on the drugs I'm having to take because I'm having a major cold and DO NOT have time to be sick right now! (Or it could just really be me ...) 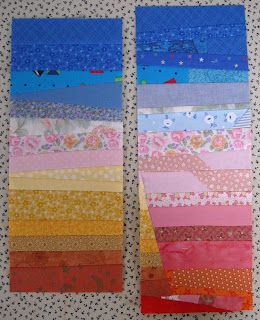 Apparently, said drugs gave me a bad case of boring, and my first attempt (on the left) is kinda blah. I became only slightly more imaginative with my second attempt, but I'm hoping Brenda can kind of blend them in with the other better blocks and still make do with them. (Maybe I'm not taking the right kind of drugs!)

Luckily, I finished my Operation Uniform block before I got sick, so I think it came out OK. It's a variation of the traditional Army Star block, which I thought would be appropriate, and I used most of the camo V sent, and made fabric for the center and corners. I messed up my star points a tidget, but you only know that because I just told you, right? 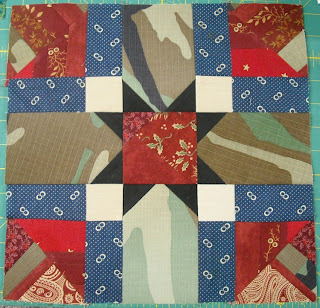 And now I need to get to work finishing up the quilt I'm making out of all the Bee blocks I received from everyone else. I'm loving it so far -- more on that project later.
Posted by Shelly at 6:08 PM