Sneaking in under the wire here with my rust block, which I actually made last Friday and then a long weekend out of town got in the way of posting.

My first grab out of my stash was for some deep turquoise. I realized I was headed down the path of my orange block, which I liked, but wanted to try a different combo. So I went with green instead. (Okay, maybe not so different, but...) I grabbed the bottom fabric first, the leafy print and the other green fabric second, and then filled in with the yellow-green, purple, and magenta. 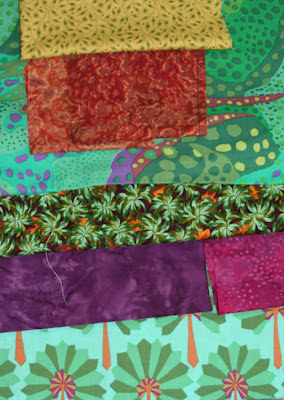 Made fabric: I am slowly getting better at estimating how much of this to make. 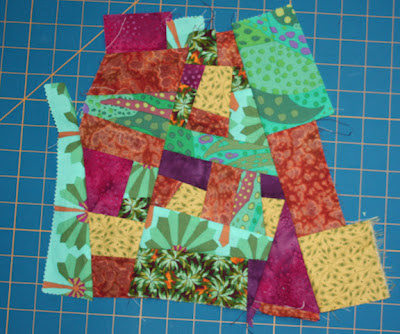 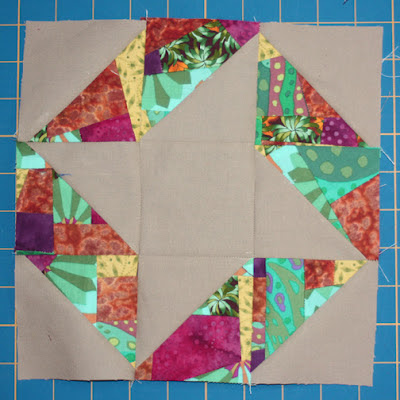 Takeaways:
I love the green hues with the rust, but that's no surprise. It's that copper/patina concept. I was pleased with the purple/rust concept, as I wouldn't have thought of that, and really surprised by the fact that the yellow-green and the magenta worked as well as they did. I do like seeing rust in a modern setting and with such vibrant, saturated friends, as my childhood memories of rust are of a country blue couch sitting on rust shag carpet in the family room.

Your right about the modern setting using "Old" colors. looks great! such a clever block!

Love your new block. I had that rust shag carpet in my house when I moved in. We pulled up all the carpeting the first thing before the moving van arrived with our furniture. We lived with just the plywood floor for awhile. It was way better than that carpet!