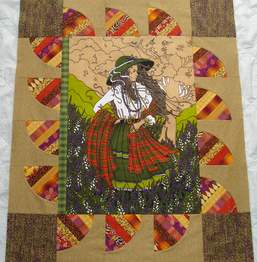 I started working on the Tea Towel Challenge quilt yesterday.  "Tess," the name I've given the woman in the tea towel, had been patiently waiting (something she is pretty good at, I'm thinking), and I was looking forward to getting started as well.

I found a use for a thrifted fabrics from a wall hanging kit (they were perfect for this!), as well as a couple of men's plaid shirts and other scraps.  I took a cue from Tess's wavy tendrils and natural curves in deciding that the drunkard's path block would be fun to incorporate.  It's a block I've been wanting to try.
I string pieced fabric strips on phone book paper for one part of the drunkard's path blocks.  The red-orange tartan in the tea towel really spoke to me, so I wanted to pull that warm color out in the surrounding blocks.
My preliminary sketch has me doing another round of DP blocks, but I think I'll let it "breathe" before deciding what's next.  I have some nice purples I'd like to use, but I've got to think on it a bit.  I do like how it's looking so far! 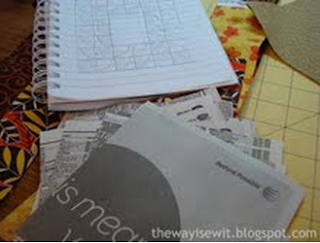 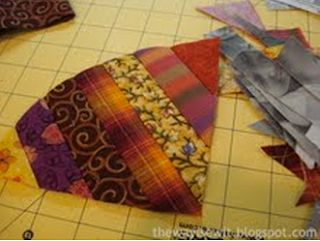 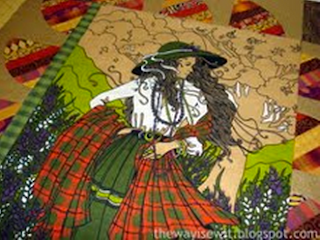 Wonderful; purple will be a good addition.

This is fabulous ! I love how the drunkards paths echo the swish of her skirts..I can't wait to see what's next.

This is going to be a winner! Love that tea towel--where do you find them? Julierose

Love the color combination and the choice to use the drunkard's path blocks. I'm with Julierose, where are you finding these great tea towels? I ordered one online and I'll post when I've pulled fabrics to try with it.

That's looking great. It is such fun to see these take shape.

Thanks for the encouraging comments, all!

I found this towel on ebay.

Someone just pointed out I've got my DPs going backwards in the top row, and I am so grateful for that heads up! I checked my rough sketch--she was right--oops. See, I knew there was a reason to let it sit a while before going on. ;)