Top and bottom borders and have been added to my Tea Towel Challenge WIP, and I am calling it done: 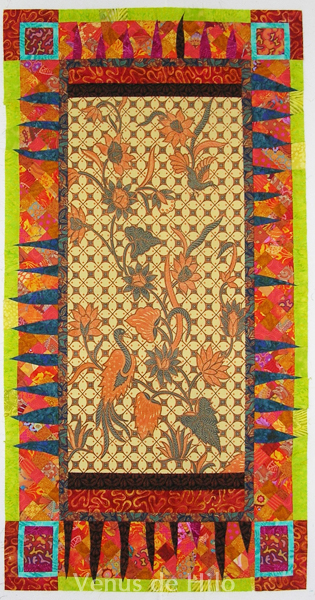 I could keep playing, and aim for more of a medallion effect, but that would make it bigger. It's already 27" x 53" and almost too big for the wall area I have in mind as a future home. I might add one more narrow border from a dark fabric, to square things up and stabilize the edge. Or not.

The cornerstones came about because there was not have enough left of the orange made-fabric bits. What I did have were four 3" squares of a lovely squiggly brown: 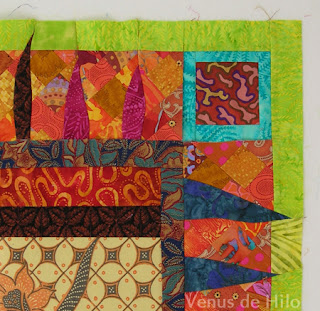 Some aqua batik brings them up to size as a far as the orange borders go, and I added more of that chartreuse to complete the outer border ... and didn't like it at all! Hunh, who'd have thought there'd be such a thing as too much chartreuse?

I ripped out the green, and auditioned the inner border fabric: 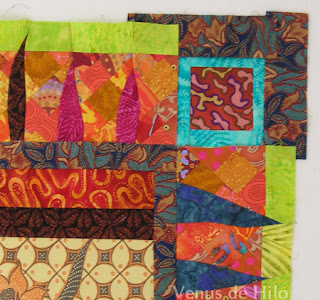 Nope, too dark.Third try was the charm: more of the squiggly dark orange batik: 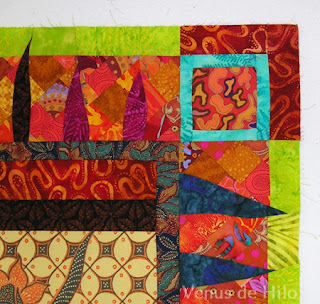 Because the bottom border is deeper, those cornerstones had to be taller. That fuschia batik was two 5" charm squares, and after making border spikes there was just enough left to do the job here, although I had to skimp on the seam allowances to make it work: 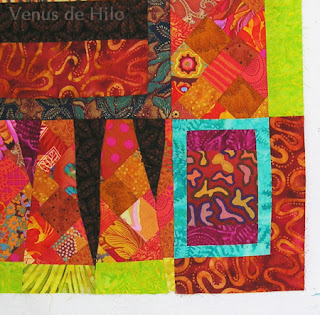 The aqua is shouting rather loudly at the moment. I have in mind adding some aqua beading to the center, and if these corner bits are still claiming more than their share of attention, I can tone them down with some darker beading or thread work on top.

I'm off to do errands in a little bit, and will stop by my LQS for some metallic and bright threads to quilt this with. It will be my first time using a novelty thread, so that will be new technique #1.

Thanks for sharing your process photos . . . have fun with the new threads!

I love the colors!!! And the design is such fun! Thanks so much for all the explanations and pictures. It inspires me to keep plucking away at problems!

This is so cool. I loved reading about your process. I think the corners are really eye-catching and don't find the aqua shouting too loudly.

OMG, just got my display reset and these photos are awfully dark. Sorry about that. Everything on my notebook was REALLY BRIGHT this morning, which made photo editing tricky. I'll see if I can fix them...

Your piece reminds me of a Persian carpet. And that exotic dark orange addition is the perfect finish. I also like the irregularities....looks like a handwoven. If it doesn't fit, I would happily find a place for it in my house!

Beautiful! i love the colors and dark spikes!

Spectacular!! And you got it done so quickly. I especially enjoyed all your blogs leading up to this work of art. Beads will only add to its beauty. Diane

Love this! And LOVE the aqua!!!
So bold and beautiful. I really really really like your borders...but they look so dad blame complicated. Or maybe I was tired when I tried to read it all. Lovely!!!

How beautiful your quilt looks, the colors are lovely and it looks perfect at that size. Really nice'''

I really love how your went bright with your tea towel borders! It looks fantastic!