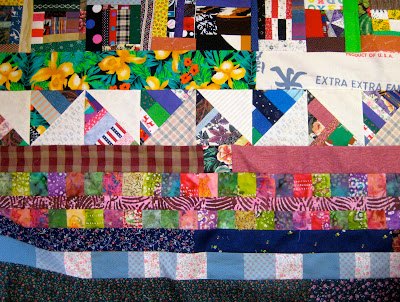 I've been "playing" with orphan blocks and strips left over from "cut offs" and quilt backings.  I decided to make them 48" long, just to have a plan.  The other part of the plan was to make one strip a day.  Sometimes that took more that 15 minutes, but not much.

There's a piece of fabric there from a rice bag yardage that says "Extra Extra Fancy".  So that's my title for this one!

Sometimes I had enough of something to make TWO 48" lengths, so I started making a second piece, or a second "half".  Finally I sewed the two halves together.  nHere's how it looks right now -- long enough to cover a queen bed, but not wide enough.

I think I'll close off the  side edges with a few more strips, and call it quits.

Now I'm interested in attacking my Orphan Box for another go around!
What do you do with your orphan blocks?

Oh Sara...I LOVE IT! Just TODAY I made my first 15 play of scraps! Thanks for the idea..because I have sooooo many boxes of them, and I just couldn't throw them away. Tell me, do you have a rhymn or reason for putting yours together. I was trying to use the same set of colors..like browns and greens. It truly is UGLY!!!

Victoria..I would like to be added to the list...and how do I stay accountable to you?

Sara! I love it! did you see the one my MOD guild made?
http://nycmetromodquilters.blogspot.com/2010/10/group-quilt-1.html

Sara, this is great and I love the name. My orphan blocks are all in a small
pizza box. Some of them I just love, but don't know what to do with them.
Love this idea!

Well, Cathy, my method was that I had just used up a bunch of the HSTs made with strips in ANOTHER quilt, and the remaining ones were driving me crazy. They had been left out, and I wanted to get rid of them. I was not in love with them at all. Then I noticed some pieced strips from left-overs hanging on my room divider...Hmm, what if I make more strips with the HSTs?

From there it was just adding one more strip each day--sort of as my "play" time. I looked around at what I had, not too long, and made a choice; then just DID it. Helps to only make one choice at a time, I think.

This is absolutely BEAUTIFUL! What a great job using up those 'orphans'!

Sara you are an artist. If I had tried to put that together it would have been a muddle, but you have brought the scrappiness together beautifully, I love it.

That's lovely, Sara! Beautiful , bright, crisp colours. Look forward to the next one!

Luv It! You have inspired me, all this talk about using those orphan blocks. I guess they are just scraps waiting to be put into a big quilt!

Beautiful use of all the leftovers. I love using the extended backing leftovers for my next projects.

Sara, your quilt is striking! Love its name!

Wonderful! I love these kinds of quilts. I've just been saving my orphan blocks, but you've inspired me to get them out and play!

What a great idea! I love how all of the orphans "play" together so nicely!