Look What She Did!

Our Fearless Leader set Janet and me up to do an intuitive swap. This is what I sent to Janet: 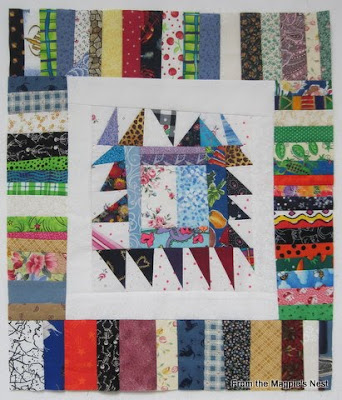 While I worked on the block she sent to me - wait, did I ever show that here? I'm pretty sure I shared my process on my blog... hmm. Anyway, eventually this little package showed up in my mailbox: 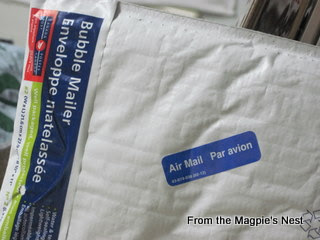 And in it was THIS! 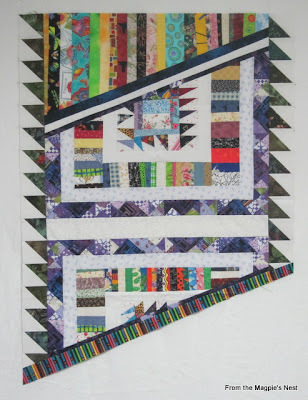 In the card she sent with the quilt top Janet says that first she went round it with the white print and then the scrappy purple border. "It was looking fabulous, but too much like a round robin quilt... I knew I wanted to add the green and white HST's but what to do first? With a sense of daring I slashed across the block and inserted the dark purple strip." Which I think is kind of funny since I got to a point with her top where I had to gird my loins and just cut into it too!

Janet continues: "This didn't really improve things... so I slashed again down the center of the purple strip and turned the pieces so they were facing out. Added the white strip in between and sewed them together." This process turned the whole thing into a parralellogram. Not wanting to leave me with that she tried the scrappy piano keys to one end but felt they needed some separation from the piecing I'd done so inserted those long strips first. At this point she felt it was time to add the half square triangles. Then, because she liked the stripes and the the way they echoed the piano keys at the top, she added the multicolor stripe along the bottom edge. Now I get to figure out how to fill in that corner - and decide how much bigger I want the final product to be. We're not sure whether we'll be swapping these tops again. It won't be any time soon as we both have other projects in the queue that need attention. I, for one, am working on a mini quilt for the "Something From Nothing" swap here. I thought I had a little top almost ready to layer and quilt but it turned out not to be quite the right size. And then it magically got TOO big! Ah well, that just means I get to play another day. :- )
Posted by Magpie Sue at 9:58 AM

Maybe you don't need to fill in the other corner...it looks good just as it is...you could even use a facing instead of binding!

Very clever!!! I love where it is at right now! Love the slash cut and how dramatically different it is.... What will happen next?? A very good challenge...