So after I'd slashed Janet's block and inserted that strip with the bright pink I wanted to include more of the bright pink. I really liked the way it brightened up the whole. I stacked and sliced the pink, the cats, and a light blue: 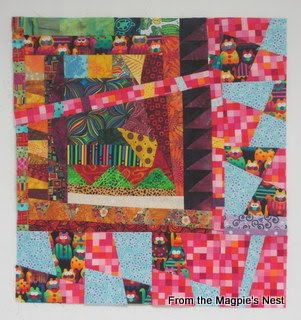 Then I tried some sticks blocks, using the blue as background. I discovered that by alternating the direction of the sticks I could get a wavy line, which I really liked. 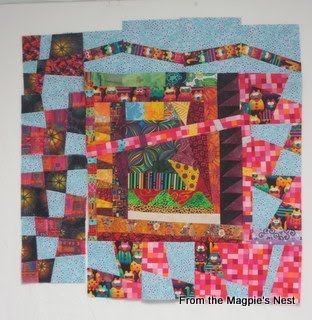 This was a promising development and spurred me on to try lots of different arrangements of the various blocks I'd made. 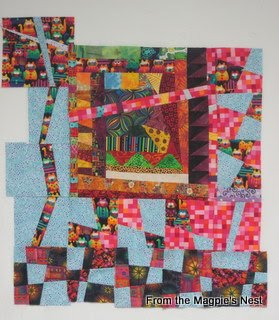 The problem (in my opinion) was that I now had too much of the light blue. It was distracting. Time to try to work in other fabrics, get more variety in the prints and colors. 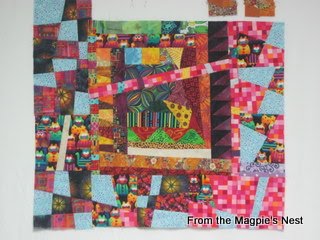 As I made blocks and sewed them in place I also sewed together the offcuts, creating a little strip. It turned out to be just the thing to finish off the top edge! 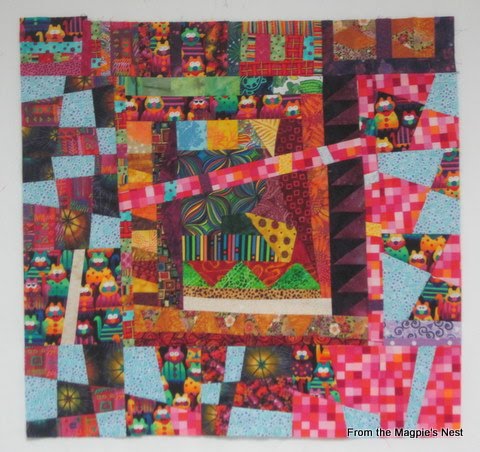 This is what I will be returning to Janet, along with some of the blocks I made but didn't use. I forgot to measure the top at this stage but it's somewhere between 30 and 36", not quite square. It will be fun to see what she does with it now!

I love all the movement! the light blue dances around ! love it!

This looks fabulous! I can't wait to see it in person.

I love this! And the cats are wonderful!! And the blue and gold tie dyed looking fabric near the bottom...and the kaleidoscope fabric in the center!!